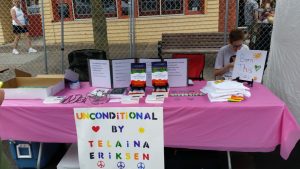 Yesterday, I attended Michigan Pride for the first time as a vendor. Since I didn’t know how sales tax and all that worked for an individual, I approached Everybody Reads and asked if I could sell books and other Pride merchandise through them at my table. They agreed (they are so great to work with). Having not done this before, I vastly underestimated amount of time I would need to prepare, pack, and borrow the stuff I would need. #ifitwasntforthelastminutenothingwouldevergetdone

My friend Chris, who I graduated from high school with, runs a small business in Defiance, Ohio called The Twisted Baker. We only live a couple of hours apart but we don’t get to see each other much. The last time we saw each other was when he made a water polo cake for Casandra’s high school graduation open house in 2014. He spent a couple of nights in Lansing and we were able to catch up a little bit. He decided to visit for Pride as well and made these AMAZING cookies for me and completely surprised me by “printing” my book covers on each one. And he drove two hours (and he works two jobs) to deliver them to me! 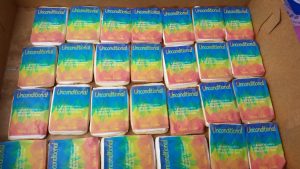 I was so lucky to have Chris and Casandra help me set up, and then we went to have breakfast at the Creole in Old Town. My friend Beth joined us a little later in the morning and we all took turns staffing our little table. We met some great people, I sold a few books and we sold some other titles, bumper stickers, buttons, books and magnets for Everybody Reads. The rain held off until after Casandra and I packed up and we were really grateful. Chris’ cookies were a huge hit and I think some ended up on social media—I saw people taking pictures of them before they ate them.

It was exhausting but a really great experience (especially given our current political climate) to spend a day with such a diverse and welcoming community.